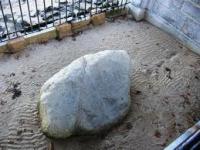 In the summer of 1976, my family took a vacation out to Cape Cod. On our way home we stopped to see Plymouth Rock.

It was my dad’s idea. He had the perspective of history and a sense of wonder. The appreciation for gazing at a rock that people we study in history stood by. Feeling a connectedness with the past. It’s tough to achieve in the U.S. where there isn’t much history.

I did not have his perspective or his sense of wonder. I remember very clearly looking over a rail (they have caged the rock) and thinking, Big Whoop.

It was a rock.

And not a particularly interesting rock at that. I remember saying something smart mouthed like, It would be more exciting if it were purple.

Today I saw a video on YouTube, maybe you’ve seen it? Quite a few people have. It’s the Double Rainbow Guy or something. Home video shot in Yosemite by a guy who reacts rather strongly, emotionally to this rainbow he sees.

There have been a lot of parodies done on it. It’s a rather extreme reaction, not something you see/hear every day.

But I have to confess to you…

I don’t know that I’ve ever been so moved by something. Of course, I haven’t seen the Grand Canyon yet, but does it have to be that big and grand to move me that deeply?

Has God done anything that isn’t a miracle?

While I watched the video I wondered how much God appreciated this man’s appreciation for the rainbow.

I want to see what God has done around me and I want to be moved that deeply. I want that sense of awe and wonder and appreciation.

I want that freedom to feel that much.

Like Chris Tomlin’s song, The Way I Was Made…

That’s what I want.